Three weeks ago I had the pleasure of attending ResusTO. This was the first iteration of this conference and I’ll use that term loosely because it was more of an experience than anything else! A cornucopia of health care professional were in attendance from emergency medicine physicians to paramedics all with an interest in improving resuscitation knowledge and skills.

I will admit when I first heard about ResusTo I was extremely enthused. The thought of attending a workshop with some of the biggest names in the #FOAMed community had me reeling with excitment. I decided I was all in – committed and ready to pull the trigger. However, I needed to get the time off work first. The days past by as I waited for the approval from work to attend and the tickets dried up. SOLD OUT. “Oh man,” I felt terrible. I knew I was about to miss something special.  So I talked myself into thinking, “this conference was going to be over your head anyway Drew, you wouldn’t fit in, this is definitely a course geared towards physicians and it won’t be your jam, forget about it.” The days passed by and I scroll my Twitter feed to see a tweet about more tickets being released. I was all over it, not wasting anytime! I was signed up and started looking for accommodations, of which there were some but well out of my price range due to the ongoing film festival in the city. Staying with family it was.

I arrived early the first day, nervous but excited. I had the pleasure of knowing one of my colleagues from work was attending with me. Not only that, I was going to meet some of my Twitter friends in real life. The venue was located next to St. Michael’s Hospital in the Li Ka Shing Knowledge Institute. A beautiful building equipped with a state of the art simulation center. The first person I recognized was none other than Jonathan Britton, I approached him and introduced myself. It’s a strange and wonderful experience meeting friends, colleagues and even mentors from Twitter. We had only engaged in conversation through social media but I felt as if I known him for ages. We looked around, discussing the content, expectations for the day, and of course paramedicine. Occasionally I would spot a #FOAMed icon, “Hey that’s Scott Weingart or Victoria Brazil,” I felt like an ultra fanboy. I had listened to their podcasts over the past few years and couldn’t believe I was in the same room as them. 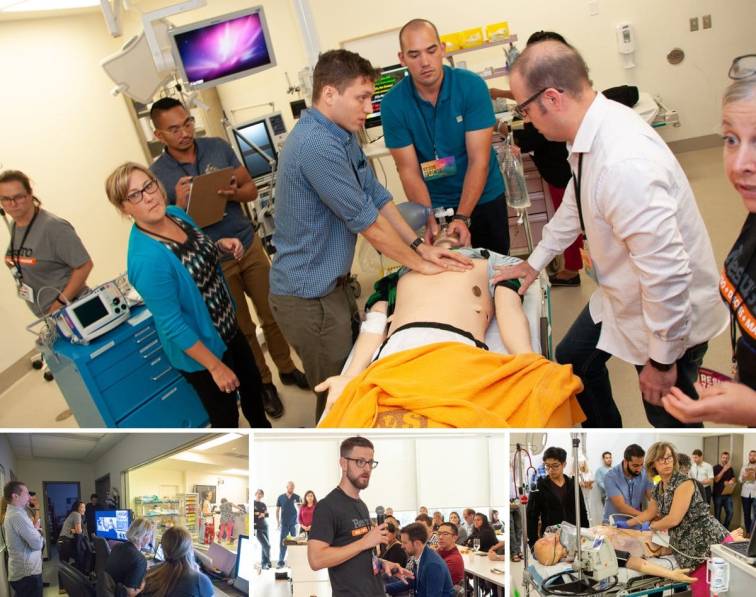 We got into the day. A great breakfast spread was provided and we headed in to the plenary session. Having not attended too many conferences, I had to look up the word plenary. Man oh man, this was great. I was bummed I couldn’t attended every course but such is the conference life. There was going to be so much content to be absorbed. The layout of the day had five workshops, two of which you could attend, one in the morning the other in the afternoon. During the plenary session we heard from each of the presenters who discussed their topics before they gathered up their learners and headed to the breakout sessions. This was great. It allowed us to get a taste of each topic before heading to the assigned sessions. Each break was met with great discussion, fine treats and networking among new and old friends.

The first session on day one was “Inter Professionalism” in resuscitation. This breakout session led by Vic Brazil. It was fantastic and right up my alley. We discussed team member’s roles and the use of ad-hoc teams for resuscitation. I valued this technique working as paramedic; resuscitation’s happen in austere environments with limited team players and different skill sets. It was interesting to identify ways I could improve my practice. No to mention how we can improve team dynamic to work in the best interest of the patient.

The afternoon began with a panel discussion. The mic was passed from educator to educator each tabling their thoughts, beliefs and take home points from their own or other presentations. Occasionally a question was asked by one of the participants, or sent in via Twitter while Chris Hicks feverishly scrolled the timeline grabbing questions for the panel. Everything was exceptionally interesting – the day was flying by. I was reflecting about how lucky I was to attend this event.

“Resuscitation Economics” was up in the afternoon, the term coined by Andrew Petrosoniak et al., was so simple yet impactful. In it’s simplest form, resuscitation economics is examining how a team optimize their resuscitation environment to produce better results for the patient. They identified system changes that nudge people in the right direction (nudging behaviour).  An individual’s behaviour can be hard to change, so let’s design a system that works for them and the patient. This can be as easy as identifying an item that is frequently used during resuscitation and move it to a location that is readily accessed and checked frequently. We learned this first hand through in-situ simulation. Time spent doing one task can’t be spent on another. This for me was a huge take home point that directly applied to paramedic practice, especially in austere environments. We need to own our environment and our equipment. We need to know our bags and truck inside and out because in that stressful moment when our patient needs us the most, we shouldn’t be wasting time looking for the McGill forceps.

The next morning was met with the same enthusiasm, another plenary session outlining the topic of the day before heading into our breakout groups. First up, “Psychological Skills for Resuscitation” hosted by Ashley Liebig. She compared the tools elite athletes use for optimal performance to those used by resuscitationists. Mental rehearsal, cognitive re-framing and self-talk will help to prepare you for future stresses of resuscitation. Using your brain as the ultimate simulator prepares you for the scenarios that you have yet to experience in real life. This is a tool I have used throughout paramedic training and one that I pass on to my students.

The second afternoon was again met with another panel discussion before heading to our last breakout session. “Optimizing Team Performance in Cardiac Arrest” was my last session. We were introduced to rapid cycle deliberate practice, first with neonatal resus and then adult resuscitation. We would take a scenario and break it down into layers. Start, stop, debrief. It was an interesting approach to improving resuscitation skills, as if each piece was a building block. If a task or skill didn’t go well, it didn’t matter. We would stop, debrief and start over again making sure to recognize errors and improve on patient care. 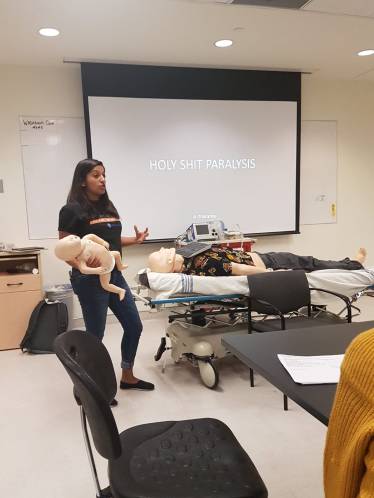 The day came to an end with a beautiful closing ceremony by Chris Hicks. This was a fantastic conference unlike anything I have ever been to. As I said at the beginning – it wasn’t just an educational conference, it was an experience. I left feeling excited, invigorated, refreshed and keen – I feel like I walked away a better resuscitationist.

Not for one moment did I feel like I was not welcome or in over my head during the program. This is something that I hope I’ve illustrated clearly in this article – especially for paramedics, you can do this! I hope my experience at ResusTO paves the way for other paramedics to attend courses or conferences they may not feel the most comfortable in. Paramedics are resuscitationist in the prehospital world.

A special thanks to Dr Chris Hicks and the ResusTO team for putting on an excellent conference and providing an utterly amazing experience.